The One who has no beginning, middle, and end. The Infinite Light, Personification of Grace and Intelligence, the consort of the Mother of the cosmic clusters, the precious crown gem for the celestials dances in the arena of spreading light within the souls (chit-ākāsh) with the hanging coral braids adorned with the half-moon praised by the world. His pollen-breaded lotus feet, I will keep on my crown. Let our relentless love grow towards Him.
– Siva Jnāna Siddhiyār
The secret of the incessant dance of the Supreme can be perceived at three levels by the seekers as follows:
1.1. One is at the cosmic plane, which is called gross dance. This can be perceived in the movement of the cosmic flux. The same dance is also there in every atom as the movement of particles. This dance represents His five cosmic activities – pancha kritya, constitutes creation – shrishti, sustenance – sthiti, desolution – samhāra, obscuration – tirobhava and grace – anugraha. This cosmic activity is the central motif of this dance.

The fivefold act of Siva
The hand that wields the drum evolves;
The hand of hope that sustains;
The fire on His hand destroys;
The Obscuration is by the flowery foot that presses down;
Gracious deliverance ensues from the flowery foot held aloft.

This grandeur conception of gross dance of Siva at the inert base of cosmos and atoms is the synthesis of science, religion and art. This is universally acknowledged by scientists as such we can see the ten feet tall statue of Lord nādarāj at the Centre for Nuclear Research in Europe (CERN)in Switzerland. This is the dance which was perceived, visualized and expressed by physicist Fritjof Capra in his book of “Tao of physics” in 1975.This is the reason for intelligence, there by an order of the inert. Let us see about this dance in his own words.
“I had a beautiful experience which set on a road that has led to the writing of this book. I was sitting by the ocean one late summer afternoon watching the waves rolling in and feeling the rhythm of my breathing when I suddenly became aware of my whole environment as being engaged in a gigantic cosmic dance. Being a physicist, I knew that the sands, rocks, water and air around me were made of vibrating molecules and atoms and that these consisted of particles which interacted with one another by creating and destroying other particles. I knew also that the earth’s atmosphere was continually bombarded by showers of particles of cosmic rays of high energy undergoing multiple collisions as they penetrated the air. All this was familiar to me from my research in high energy physics, but until that moment I had only experienced it through graphs, diagrams and mathematical theories. As I sat on that beach my former experience came to my life. I saw cascades of energy coming from outer space, in which particles were created and destroyed, in rhythmic pulses. I saw the atoms and the elements and those in my body participating in this cosmic dance of energy. I felt this rhythm and I heard its sound and I knew at that moment that this was the Dance of Siva, the Lord of dancers, worshiped by the Hindus”
–from the book Tao of Physics by Fritjof Capra 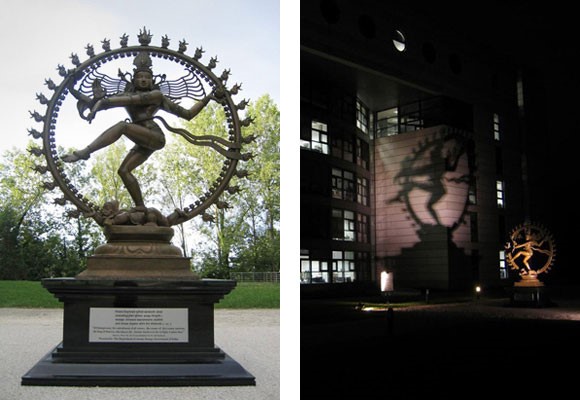 Throwing Maya away, gutting with fire cruel Karma,
Crushing irretrievably āNava, manifesting Grace,
Impelled by love, immersing the soul in the sea of Bliss:
This indeed is the Dance enacted by our Father-Lord.

O Son! Listen to the exposition of the dance that is
Enacted in the soul the emblem of which is the letter -Ya
Representing the number ten made up of eight and two.
The Lord with His body si va ya na ma
Dances, that all lives may gain deliverance.

2. This Supreme Dance can also be perceived at five levels by the advanced seekers as follows:

2.1. praḷaya tāṇḍava is the dance performed for dissolving the created worlds and tattvas into their respective causal sources and dissolving even the causal sources into Śakti. This is performed in the rāja sabhā identified with annamaya kośa – our gross body. This dance signifies the creation anew (punar utbhavam). praḷaya tāṇḍva denotes not only the total dissolution but also the immediate new creation.

2.2. samhāra tāṇḍava is the dance performed for the destruction of hostile forces which impedes the efforts undertaken by the aspirant to disentangle himself/ herself from the triple bondage – āNava, karma and māyā and his/ her spiritual progress. This tāṇḍava is performed in the dēva sabha identified with prāṇamaya kōśa – our vital body.

2.4. atputa tāṇḍava is performed for the sake of manifestation of different forms of Śiva necessitated by the worldly events, both good and bad. ‘atputam’ means that which is not seen before or that which has occurred anew. This is performed in the kanaka sabha identified with vijñāṉamaya kōśa – our intellectual body.

2.5. āṉanda tāṇḍava is the dance of Bliss for the bestowal of grace in the form of eternal bliss and for the liberation of the souls. This is performed in the cit sabha identified with āṉandamaya kōśa – our causal body.

The great sages are poised in the Bliss of Silence, having quelled
The triple fetters; they are fixed themselves in the Self;
They quaff Bliss witnessing the Divine Dance; this is what
The dance of the gracious Lord of the Ambalam performs for them.

– UNmai viLakkam, one of the fourteen MeikaNda Sāstra texts, song 37
3. There are even more subtle dimensions of the Supreme Dance revealed by the seers which are beyond the grasp of our words and deeds.

It is beyond the ken of our imagination;
It is from Grace personified;
It is poised in wondrous Beauty;
It abides above and beyond the peak of vedic scriptures,
At the mystic gnostic ether of conscious – Tiru-chitr-ambalam;
This is the Grand Dance enacted by the,
Ankleted and flowery feet of the Supreme! Praise be!

Omniety is He; Who is hard to be comprehended and expressed
By all sentient beings in all the cosmic worlds;
In His crest rests the crescent moon and the water of Ganga;
Limitless is His effulgence;He dances in the Ambalam.
We hail and adore His ankleted flowery-feet
Which is the source of all the cosmic flux.

Jnanis, the realized persons only can envision and experience all forms and planes of this dance of Siva everywhere.

His Holy form is Everywhere;
All-pervading His Siva-Sakti;
Chidambaram is Everywhere;
Everywhere His Dance,
As Siva is all and Omnipresent,
Everywhere is Siva`s Gracious dance, temporal, timeless, incessant is
All, all, His Sport Divine.